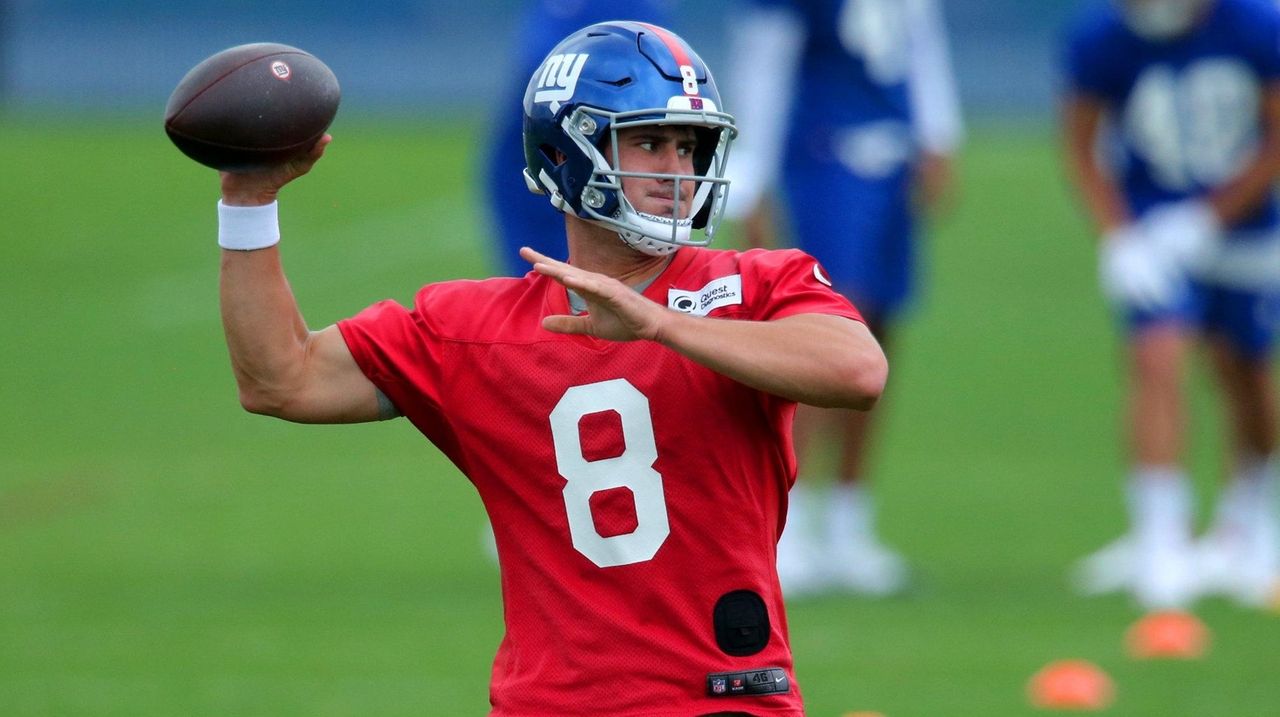 The hope of Daniel Jones lies in these two passes.

With wide receiver Darius Slayton lined up to the right of the formation, Jones drops back and waits for the third-year receiver to make his move. Slayton darts upfield, makes a cut to his left and then darts to the right. Jones lofts a perfect pass to Slayton over the outstretched arms of the defender.

Next one: Newly acquired wide receiver Kenny Golladay, in whom the Giants invested $72 million, races up the middle of the field, and before he looks back, Jones fires a pass in his direction. Golladay times the pattern and turns his head to find the ball heading straight toward him.

Yes, it is only June, and these are two of dozens of passes Jones threw during an organized team activity on Friday. But if Jones is to achieve the promise placed in him by a Giants franchise desperate for a long-term successor to Eli Manning, he will need to produce these kinds of moments when 70,000 or more fans are packed into MetLife Stadium and other NFL venues.

Enough with the incremental improvements he showed last year, when he didn’t turn the ball over quite as much in the second half of the season and was modestly effective in helping the Giants flirt with a playoff spot in a woeful NFC East.

Jones needs to make big-time plays in big moments for the Giants to be convinced he indeed is the answer.

For now, coach Joe Judge believes this kind of offseason work eventually will translate into regular-season results — if for no other reason than this: Jones spent his first offseason as the unquestioned starter in 2020, participating in virtual practices necessitated by the COVID-19 pandemic. At least he is on the field, not on a computer, as he continues to digest Jason Garrett’s offensive scheme.

“You know, he didn’t have the opportunity last year to have a spring, to have a true training camp to go out there,” Judge said. “Going with the same terminology, the same language this year, that slows it down a little bit for any player. I think the biggest thing right now for any quarterback, including Daniel, is just getting on the same page with all the players and getting the timing down.”

Jones didn’t even have that luxury at this time last year; the Giants’ first on-field practices occurred on Day 1 of training camp after an entirely virtual offseason. With the ebbing of the pandemic and the Giants and other teams able to operate in a more traditional format, the on-field work can only help.

“I think it’s important, it’s a good opportunity to get on the field, get together, get with coaches,” Jones said last week. “I think we’ve got some good work in with guys, and we’ll keep working on it.”

There clearly is pressure on Jones to come through, especially now that he’s in his third season and the Giants have surrounded him with a better supporting cast that includes Golladay, tight end Kyle Rudolph and first-round receiver Kadarius Toney. And remember, too, that Saquon Barkley will return from a knee injury that kept him out nearly the entire 2020 season.

And though Jones insists it’s not all on him — “It’s on all 11 guys to do their job every play . . .   It’s not on any one person more than the other,” he said — the fact is that it really is on him. If not all of it, then certainly almost all of it.

Manning lived with that kind of pressure and came out of it with two Super Bowl MVP trophies; now it’s Jones’ turn to work in the crucible that is New York and see if he has championship capability.

The NFL has become increasingly impatient in terms of quarterback development, and even though Judge has consistently defended Jones from any outside criticism, the fact is that there has to be measurable improvement in 2021 — or

else it will be time to look elsewhere for the answer.

Judge likes what he has seen.

“I think [Jones’] overall understanding and command is really becoming where we want it to be, and you saw that last year as he grew within it,” he said. “In terms of being in the huddle, his command has really always been great.”

It is the nuanced approach with his teammates that will set Jones apart.

“For all of our quarterbacks, they have to get a feel for the specific guy they are throwing to and the routes, and that route may look different with certain guys, what they do at the top of the route, how their release may change and where they put the ball as a quarterback and where they can expect the ball,” Judge said. “So they have to get a feel for each other and that just takes reps and time, and I’m proud of those guys working hard every day and putting that time in.”

Judge will get a better idea of Jones’ progress in the upcoming week when the full team gathers for a three-day mandatory minicamp. There will be more game-speed sequences. And some hitting. And some real football action in their final offseason run-up to training camp in July.

It will be a chance for Jones to interact with his full cadre of offensive contributors and put in some fast-paced work. A chance for Judge to see just how far Jones has come.

And just how far he needs to go.