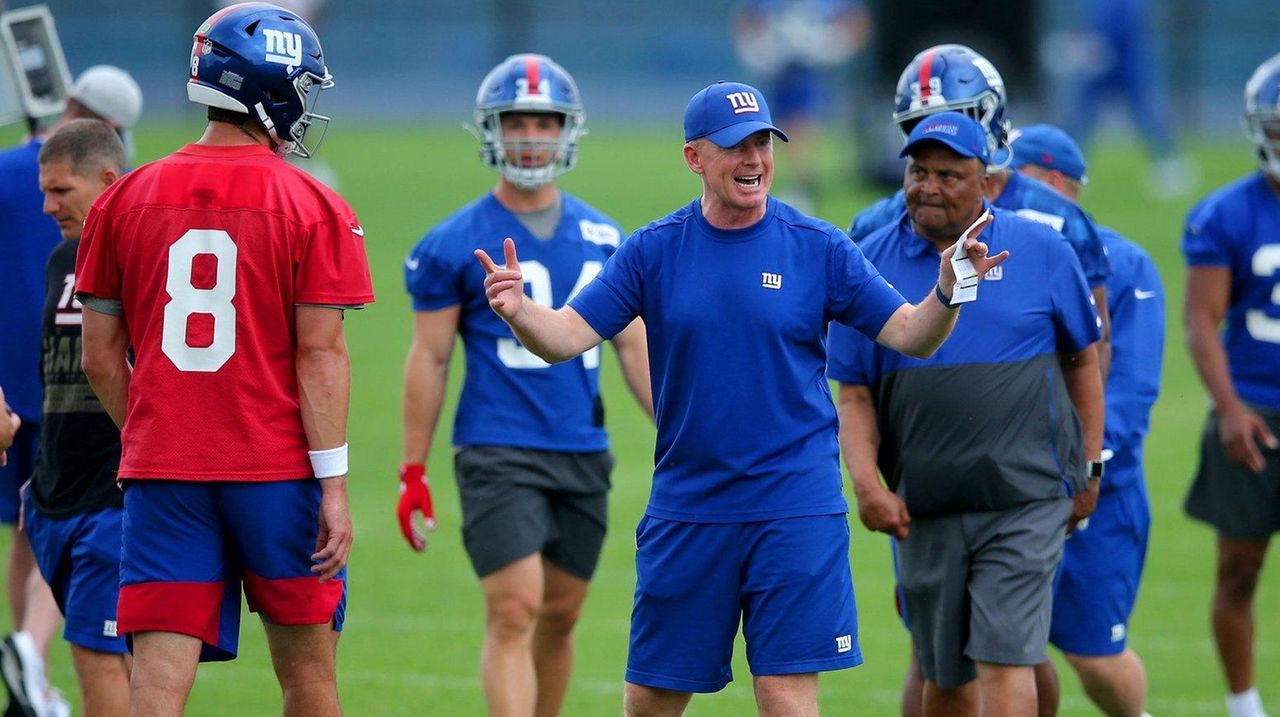 Pressure on Daniel Jones? No question the third-year quarterback is under the spotlight in what could be a make-or-break year.

But Jones isn’t the only member of the Giants’ offense whose performance will go a long way toward determining whether this team can be a playoff contender or a flop.

If Jones is under the most pressure of anyone in the organization, then Jason Garrett might be a close second. With the Giants investing so heavily in free agency, the draft and other resources in hopes of reviving its flailing attack, the erstwhile Cowboys head coach and current Giants offensive coordinator will surely be on the hot seat this season.

If he can dial up enough of the right calls for Jones & Co., then this offensive makeover will have been worth it and the Giants can justly consider themselves worthy of an NFC East title. If not …

“Any time you add pieces, whether it’s in the draft or free agency, you’re obviously doing that to help improve your team, create competition, get guys out there that can help you and make plays and become more explosive,” Garrett said Wednesday at the team’s mini-camp. “We are excited about the additions we have. We are trying to get those guys acclimated. We’re also excited about the guys who were with us before and they have a year under their belt now.”

In fairness to Garrett and the offense, it wasn’t an easy transition in 2020, when he first came aboard after parting ways with the Cowboys’ as their longtime head coach. There were no offseason practices because of the COVID-19 pandemic. And no preseason games to ramp up the offense. It was zero-to-60 right off the bat. Or, more like 0-to-25.

The offseason makeover was significant. The Giants came away with the top-rated free agent receiver in Kenny Golladay of the Lions, signed tight end Kyle Rudolph to improve the red zone offense, signed running back Devontae Booker, drafted Florida receiver Kadarius Toney in the first round, hired Rob Sale as offensive line coach and brought back veteran line coach Pat Flaherty in an advisory role.

And don’t forget that Saquon Barkley is on track to return from a season-ending knee injury.

That’s a lot of improvement on paper. Now it’s up for Garrett to put Jones in position to make it all work.

“You improve day-by-day, with every opportunity you get, you build on the good stuff, you learn from the other stuff and you keep moving forward,” Garrett said. “(Jones’) approach is outstanding. His leadership has been off the charts, and we are excited to work with him.”

Garrett remains optimistic that the improvement Jones showed toward the second half of last season, especially in terms of ball security, will continue in 2021. The fact that the offseason program has been a more typical in-person experience gives him a fighting chance.

But Garrett himself must show improvement, especially after last year’s unimpressive offensive showing. He took an unvarnished look at what went wrong last season in hopes that his self-scouting will lead to different – and better results – moving forward.

“I think every year you go back and evaluate what you did and how you did it and ways you can do things better,” he said. “Sometimes you say, ‘Hey, we like how we do it that way’. Other times you say, ‘Hey, we’ve got to teach that differently or come up with a new thought or a new idea’. I think that’s just part of the process and that’s how you grow and evolve as an individual coach and as a unit and ultimately as a team.”

Keeping the turnovers to a minimum is the first priority.

“The biggest issue with this team going into last year was obviously the turnovers,” he said. “Over the last couple years, really just not giving the team enough of a chance to win, when you’re down 31, 32 on turnovers and turnover ratio and the early part of the year we didn’t do a very good job of that. If you look at us in the latter part of the year, we did a better job taking care of football and winning the turnover ratio, and that gave us a chance to win games down the stretch.”

But it will take more than just holding onto the football.

“We certainly have to become more explosive on offense, make big plays and score more points and that’s a process we are going through,” he said. “I do think young guys playing, give them a chance to get some experience, they grow as a result of that. We also have a couple new guys that we’re adding to the mix to try to get them acclimated as quickly as we can and continue to grow day-by-day.”

Just as big a year for Garrett.