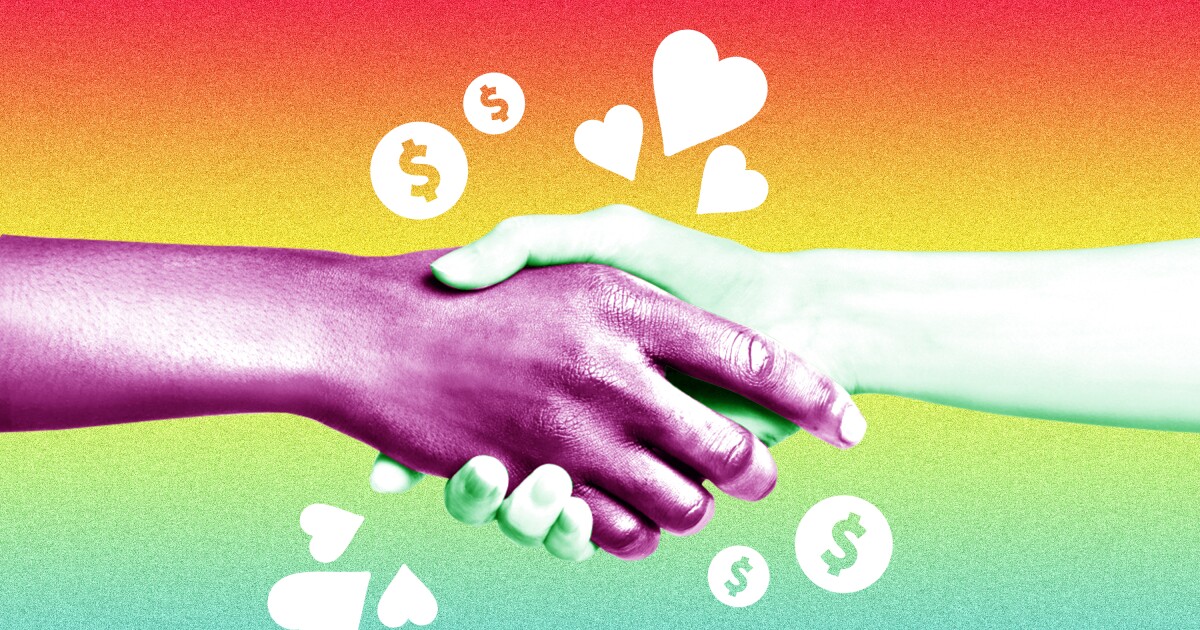 If you’re looking to champion the LGBTQ community, especially during Pride Month, look no further. We’ve compiled a list of organizations in L.A. and nationwide to support, thematic (and philanthropic) clothing collaborations to wear, authors to read and other key avenues for exploration.

Here are 22 ways to show support for — and to celebrate — LGBTQ organizations and creatives this month.

Donate or volunteer for these five organizations that are making major strides in the movement toward equality.

1. The Los Angeles LGBT Center is the nation’s largest LGBTQ organization, with 800 employees who provide programs, services and global advocacy in the areas of medical and mental health, social services and education for individuals and their families. Established in 1969, the nonprofit has several locations in Los Angeles that provide various services, including housing for homeless youths and programs for senior citizens. From 6 to 9 p.m. June 27, the LGBT Center will have its Pride Picnic at Hollywood Forever Cemetery in L.A. (Tickets for socially-distanced parties of six are $150 for general admission and $450 for VIP.) lalgbtcenter.org

2. The Trevor Project provides crisis intervention and suicide prevention programs and services for people younger than 25. Its Trevor Lifeline (866-488-7386) allows individuals who are struggling an opportunity to speak with a trained volunteer counselor at any time of day, any day of the week. thetrevorproject.org

3. Gay for Good is a community-building organization that promotes a better world through service projects such as park restorations, providing meals for the homeless and volunteer work. Although founded in Los Angeles, the organization has 17 chapters nationwide, including one for the Orange County and Long Beach area. gayforgood.org

4. The It Gets Better Project is a national nonprofit that aims to empower and connect individuals as they navigate their sexuality and gender identity. The organization began as a social media campaign and has grown into a multimedia platform that reaches millions through media programming and community-based service providers. itgetsbetter.org

5. GLSEN is focused on ending discrimination, harassment and bullying related to sexual orientation and gender identity in schools nationwide. Composed of educators, students and various local GLSEN chapters, the nonprofit aims to create safe environments for kids in kindergarten through 12th grade through inclusive policies and curriculum. glsen.org

6. The Gay Men’s Chorus of Los Angeles is a performing arts organization that uses music as a form of communication and bonding among the LGBTQ community and Los Angeles residents and guests. The nonprofit also provides outreach programs including its Alive Music Project for middle and high school students and works with the Arts for Incarcerated Youth Network. The Gay Men’s Chorus will present a free “Pride Shining Through” virtual concert 8 to 9 p.m. Saturday featuring songs such as “This Is Me,” “I Wanna Dance With Somebody” and “Raise You Up.” (Donations of $20 or more will support the event and the organization.) gmcla.org

7. Vox Femina Los Angeles is a female chorus that performs music primarily by women composers. Founded in 1997, the group made its debut as guest performers with the Gay Men’s Chorus of Los Angeles. Comprised of a diverse group of individuals from various backgrounds, cultures, races, beliefs and sexual identities, Vox Femina features a wide array of singing talent. The group’s next performance will be virtual because of current COVID-19 restrictions. The Vox Cabaret will start at 5 p.m. June 12 with host Abdullah Hall, artistic director of the Trans Chorus of Los Angeles. Tickets are between $10 to $250 (for a catered-meal package). voxfemina.org

Wear your pride on your sleeve. Or your foot. Or wherever else. These five brands created Pride-themed capsule collections to celebrate the occasion with a portion of proceeds going toward LBGTQ organizations, including a few of the nonprofits mentioned above.

8. Converse launched a collection of 16 colorful slides and sneakers ($30-$115) as well as three shirts ($20-$30), with proceeds benefiting the It Gets Better Project, Ali Forney Center, BAGLY and OUT MetroWest. converse.com

9. Pair of Thieves is selling Pride-themed underwear ($12.99), socks ($6.99) and masks in three-packs ($14.99), with 50% of proceeds benefiting the Trevor Project. Also, the L.A. brand is teaming with eatery Rocco’s WeHo (8900 Santa Monica Blvd., West Hollywood) for the Make Up for Lost Pride event at 4 p.m. June 12. It will feature celebrity guests, an exclusive in-person look at the brand’s Pride collection and various giveaways. pairofthieves.com

10. Ralph Lauren’s Pride capsule collection includes sunglasses, a graphic tee, a sweatshirt, sweater, fanny pack, baseball cap, socks, water bottle and fragrance. Prices range from $16 for socks to $128 for a fleece sweatshirt; 100% of the price of each polo shirt benefits the Stonewall Community Foundation and 25% of other items benefit the organization. Additionally, Ralph Lauren Fragrances and Ralph Lauren Eyewear will show support through donations to the Stonewall Community Foundation. ralphlauren.com

11. Disney released a large Pride collection of apparel, plush toys and accessories, including the Loungefly Disney Mickey Mouse rainbow mini backpack ($49.90), which is available at hottopic.com. The company also has a Mickey Mouse ringer T-shirt ($19.99) for children. (Mickey appears in a rainbow of colors with the word “LOVE” emblazoned on the shirt.) Additionally, the company released its first Pride-themed Pixar, Marvel and Star Wars memorabilia. All pieces from the collection benefit various LGBTQ organizations, including GLSEN and Minus18. shopdisney.com

12. Savage X Fenty launched its first Pride capsule collection, called Savage X Pride, on Tuesday. Shot in Los Angeles, the campaign was created entirely with individuals from the LGBTQ community — from the talent in front of the camera to the behind-the-scenes creatives involved. Pieces include thigh-high stockings, a whip, bralettes, jock straps, boxer briefs and robes from $16.95 to $69.95, with an inclusive size range of 30A-42H and XS-3X as well as small to XXXL. A portion of the collection’s proceeds benefit five different organizations, including GLAAD. savagex.com

Consider reading the works of these five writers whose stories cover subjects including identity, sexuality and empowerment.

This debut memoir follows Broome’s journey growing up as a gay Black man in Ohio during the late 1970s and early 1980s. He addresses childhood trauma and his experience with racism and homophobia; however, Broome manages to include humor throughout his self-exploration. $26. brianbroome.com

14. “Fairest: A Memoir” by Meredith Talusan

Talusan’s debut memoir follows a young boy from the Philippines who immigrates to America, where she becomes a woman. Her book explores race, class, sexuality and community through her unique life experiences. $27. mtalusan.com

15. “On Earth We’re Briefly Gorgeous: A Novel” by Ocean Vuong

The critically acclaimed Vietnamese American poet’s debut novel is written as a letter from a son to his single mother who is unable to read. The book follows the fictional family’s history while exploring class, race and the power of overcoming trauma to find joy. $26. oceanvuong.com

The Houston-born author wrote a short-story collection set in his hometown that explores a fictional narrator’s experience as the gay son of a Black mother and Latino father as well as the neighborhood and characters surrounding him. $25. brywashing.com, amazon.com

The longtime memoirist’s latest book follows her journey to finding herself and her authentic voice. Championed by Reese Witherspoon, “Untamed” is Doyle’s third book in a series of woman-empowering memoirs. $28. momastery.com

The Cooper Do-Nuts uprising in May 1959 in L.A. is considered to be the first LGBTQ revolt in the U.S. However, it’s worth educating yourself about other aspects of LGBTQ history, including Stonewall, the LGBTQ civil rights movement and today’s top leaders and creatives who are shaping policy as well as Hollywood.

18. FX’s “Pride” is a series of six documentaries that tell the history of the LGBTQ community. The episodes are executed by different filmmakers, including Cheryl Dunye, Andrew Ahn, Tom Kalin, Alia Shawkat and Yance Ford, who each explore a different decade from the 1950s to present day. Streaming on FX Now, fxnetworks.com/shows/pride.

19. New York Public Library’s “The Stonewall Reader” is an anthology that documents the fight for LGBTQ rights in the 1960s while spotlighting activists such as Ernestine Eckstein and Sylvia Rivera, the latter co-founder of Street Transvestites Action Revolutionaries, who were at the forefront of the Stonewall uprising. The book includes first-person accounts, diaries and newspaper articles from the time. $18. amazon.com

22. ONE Gallery’s “Pride Publics: Words and Actions” multi-site outdoor exhibition is a visual dialogue among historical and contemporary LGBTQ change-makers. Twenty-eight large-scale (4-foot by 5-foot) black-and-white posters featuring contemporary LGBTQ+ artists, writers and community organizers and inspiring quotes will be wheat-pasted in public spaces in West Hollywood and later in L.A. Derrick Austin, Rocío Carlos, Cassils, Rick Castro, Ani Cooney, Patrisse Cullors, Durk Dehner, Angela Divina, Ramy El-Etreby, Joey Terrill and Yozmit are among the people being highlighted. Organized by the ONE Archives Foundation and curated by multidisciplinary artist Rubén Esparza, the free exhibition will kick off with a window display at a public art site in West Hollywood (868 N. Robertson Blvd. near the intersection at Santa Monica Boulevard) on June 5. In October, the posters will be at multiple sites in Los Angeles. There will also be a gallery installation viewable from the window of the site in West Hollywood. More information on the exhibition is available at onearchives.org/pridepublics.