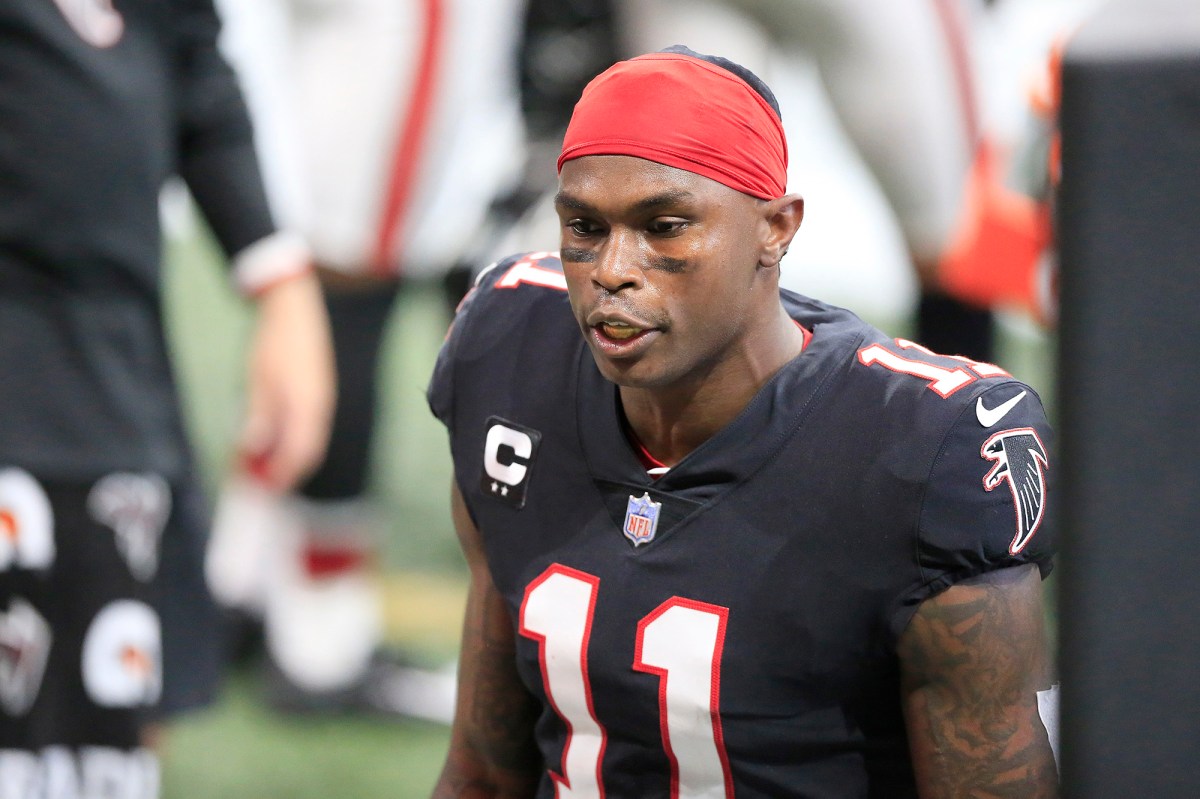 Looks like all of A.J. Brown’s wooing of Julio Jones to the Titans worked out exactly as intended.

The Falcons are trading Jones and a sixth-round draft pick in 2023 to the Titans for a second-rounder in 2022 and a fourth-rounder in 2023, the Titans announced. The deal leaves the Falcons with $7.75 million in dead salary cap money but the Titans will take on the final three years of Jones’ contract, including his $15.3 million salary this season.

Jones wanted out of Atlanta, as he privately told the team months ago and then revealed publicly in a strange on-air phone call with co-host Shannon Sharpe on FS1’s “Undisputed.”

So he goes to Tennessee, where, if healthy and producing like in his past, he elevates the Titans into the conversation of contenders, in a second-tier group with the Bills, Ravens and Browns as the top challengers to the two-time defending AFC champion Chiefs.

The timing of the trade allows the salary-cap-strapped Falcons some breathing room. If he was traded before June 1, he would’ve counted for $23.25 million in dead cap space. This way, the Falcons save $15.3 million for the time being by kicking it into the future cap.

There is no question regarding whether Brown, who has 1,000 yards receiving in each of his first two NFL seasons and is coming off his first Pro Bowl selection, will be comfortable sharing targets with Jones. Brown spent the past two weeks making impassioned pleas on social media to be united with Jones.

The recruiting efforts included Brown sharing publicly a voice message he left for Jones telling him, “if you want to carry the load, you can carry the load, but if you get tired you know I’ll carry you.” So, what was Brown’s reaction to the news that a trade is all-but-complete and the Titans have assembled arguably the best receiver tandem in the NFL?

“Please excuse my language,” Brown wrote Sunday morning on Twitter, “when I say this “y’all done F–ked up.”

Considered a defense-first franchise ever since the end of the Steve McNair and Eddie George era, the Titans suddenly have a fearsome offense. It’s not just Brown and Jones, but bruising 2,000-yard rusher Derrick Henry as well.

One-time Dolphins first-round bust quarterback Ryan Tannehill has resurrected his career over the last two years with the Titans, throwing 55 touchdowns compared to 13 interceptions and posting an 18-9 record, including a one-and-done in the playoffs.

Now Tannehill has a future Hall of Famer and All-Decade Team selection in Jones, who averaged an eye-popping 103 catches and 1,564 yards over a six-year span from 2014-2019. Jones was limited to nine games by a hamstring injury last season, but he still put up 51 catches for 771 yards and three touchdowns.

The trade breaks up one of the NFL’s all-time productive quarterback-receiver duos. Jones’ 95.5 receiving yards per game rank No. 1 all-time, far ahead of No. 2 Calvin Johnson (86.1).

It is not clear how much longer the Falcons will stick with Matt Ryan, but his replacement for Jones already is in the fold as tight end Kyle Pitts. With Pitts – the No. 4 pick in the 2021 NFL Draft – and Calvin Ridley, the Falcons have two dynamic young pass-catchers.

By trading Jones to the Titans, the Falcons shipped him out of the NFC. It is unclear if an NFC rival offered a first-round pick, as was reported to be on the table. The Packers could’ve tried to make a splash trade for Jones as a way of mending fences with disgruntled trade-seeking quarterback Aaron Rodgers.