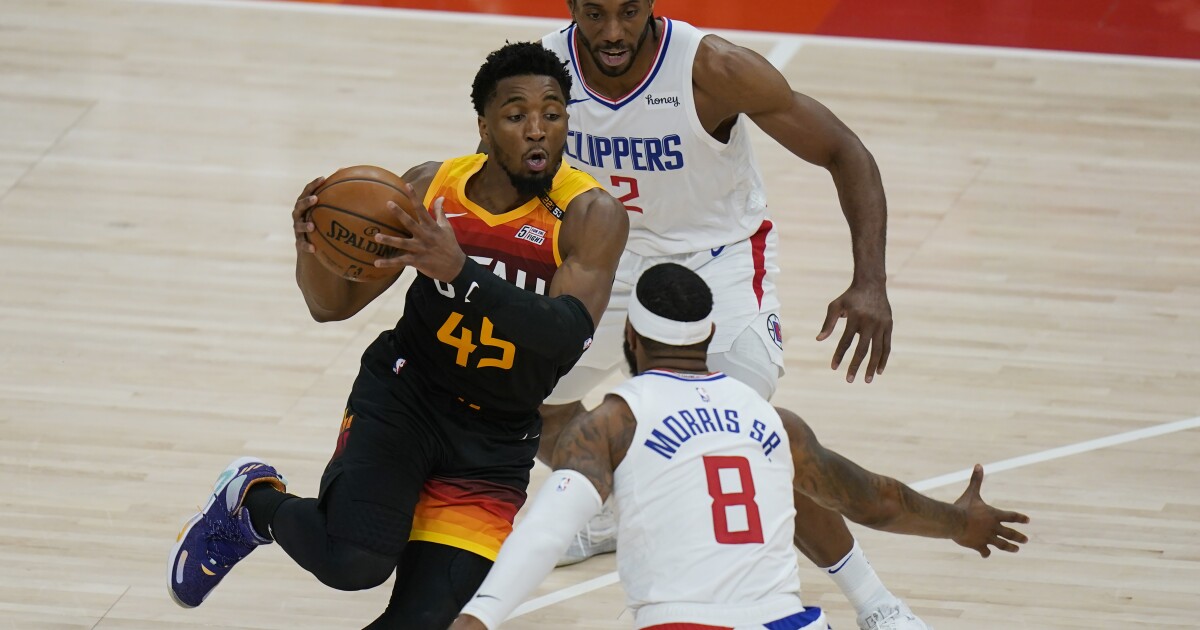 On the Utah Jazz bench before the fourth quarter of a tie game with the Clippers on Tuesday night, Donovan Mitchell made a bold and blunt prediction.

“They played Game 7 two days ago, it’s all how we start this quarter!” he shouted to his teammates. “They’ll call it quits and get ready for Game 2 if we make them!”

The Clippers’ intensity did not call it quits, but, in the wake of one of the most emotional wins in franchise history against Dallas on Sunday, everything else indeed failed them.

Their legs quit. Their shooting quit. Their defense quit. And ultimately, the Game 7 hangover gave them a splitting headache that made their final possession a disorganized surrender into a 112-109 loss in a game they could have stolen.

The Jazz won the opener of this second-round series even though they missed 20 consecutive shots in the first quarter, bricked 33 three-point attempts, trailed by 13 at halftime and allowed the Clippers one final potentially tying possession with 15.9 seconds left.

Before that possession, Tyronn Lue had a timeout. The Clippers coach didn’t call it. The best three-point shooting team in the league with one of the most clutch shooters in the league had a chance to set up a tying shot, but instead chose to play on.

Rudy Gobert, the Jazz‘s 7-foot center who would have likely been removed from the game if a timeout had been called, was standing in Morris’ face, blocked his shot and ended the game.

The crammed crowd at Salt Lake City’s Vivint Arena continued to roar, the Clippers’ shoulders slumped and a perfect opportunity to swipe a series-opening win was lost.

“We’ve got to be ready to fight for a full 48 minutes the next game,” said Clippers reserve guard Luke Kennard.

Over the next two days they will surely be reminded of their 0-8 record in conference semifinal series during the franchise’s 51 NBA seasons. They will also be made aware of the Jazz’s 32-6 record at home this season, and how they must buck that trend at least once to win this series.

And, yeah, Lue might be asked again about that timeout still tucked away in his pocket.

The Clippers coach adamantly defended his decision not to stop the action after Rondo rebounded a Donovan Mitchell miss, noting that he didn’t want to give the league’s most efficient defense time to figure things out.

“I just thought getting a stop and getting down on a break with Gobert on the floor was going to generate an open three. … That’s the best time to try to get a three especially when a team doesn’t know if they are going to foul or what they are going to do coming down in transition,” he said.

It was an appropriate ending for a team that simply ran out gas. The seven games against the Dallas Mavericks were too much. The two-day turnaround from their near-perfect Game 7 win against the Mavericks was too short. The Clippers came out slugging, but when the Jazz punched back, they too often dropped their gloves.

“I thought their physicality in the second half picked up … getting it to us and being physical and we didn’t match that physicality on the offensive end,” said Lue.

The Jazz outscored them by 16 in that second half, with more rebounds, more free throws and 32 second-half points from doing-whatever-he-wanted Mitchell, who scored 16 points in the third quarter and 45 for the game.

Even their fans picked up the pace, taunting George with chants of “Playoff P!” and “Overrated” when he was at the free-throw line.

Midway through the fourth quarter, with the Clippers committing dumb fouls, making a couple of silly turnovers and missing 60% of their shots, the Jazz took a 10-point lead that was ultimately too much to overcome.

“This was a tough one,” said Kennard, who was a bright spot for a second straight game with 18 points.

The usual Clippers stars were no match for Mitchell, who constantly received mid-game advice from that new Jazz co-owner Dwyane Wade, who was sitting courtside.

“I continually ask him what he sees,” said Mitchell.

Hey, Anthony Anderson, when you’re sitting courtside at Clippers games, do you see anything? How about you, Steve Ballmer? Anybody? Advantage Jazz.

“There’s a saying that it’s, like, by any means necessary,” said Mitchell. “And I think that’s what you see from a lot of us tonight.”

Meanwhile, the Clippers didn’t do what was necessary, meaning that their two stars didn’t really shine.

Leonard wasn’t as aggressive or effective as usual, missing more than half of his shots, getting to the foul line only twice and recording a team-low minus-12 when he was on the court.

George pulled his usual postseason disappearing act with just one basket through three quarters and making only four in 17 shots for the game.

Reggie Jackson was mostly ineffective and fouled out, while Patrick Beverley, Terance Mann and Rondo offered little relief, combining to shoot five for 14 from the field.

“They were in desperation mode and playing hard and hustling way more than us,” said George.

So it’s all because of the Game 7 hangover, right? This is not about the Clippers being the same old Clippers, is it? The exclamation-point ending for one team was a question mark for the other.

Before the game, in a blast from the past, Jazz coach Quin Snyder took a direct shot at the entire Clippers organization, openly accusing them of tanking the final two games of the regular season to avoid a second-round series against the Lakers.

The Clippers sat their stars, lost games to Houston and Oklahoma City, and wound up as the fourth seed in the bracket with top-seeded Utah.

“Obviously, we’re a matchup the Clippers felt was advantageous to them,” said Snyder.

The Clippers didn’t take the bait.

“No, I’m not offended by anything, I heard it all,” Lue said. “But we didn’t even know. … We had to get past the first round first to even get to them. So if he wants to use it as bulletin-board material for his team, then that’s just the way he has to do it. I don’t worry about that stuff, though.”

Whether the Clippers wanted the Jazz or not, well, they’ve got them. One game down, and now they must figure out what to do with them.