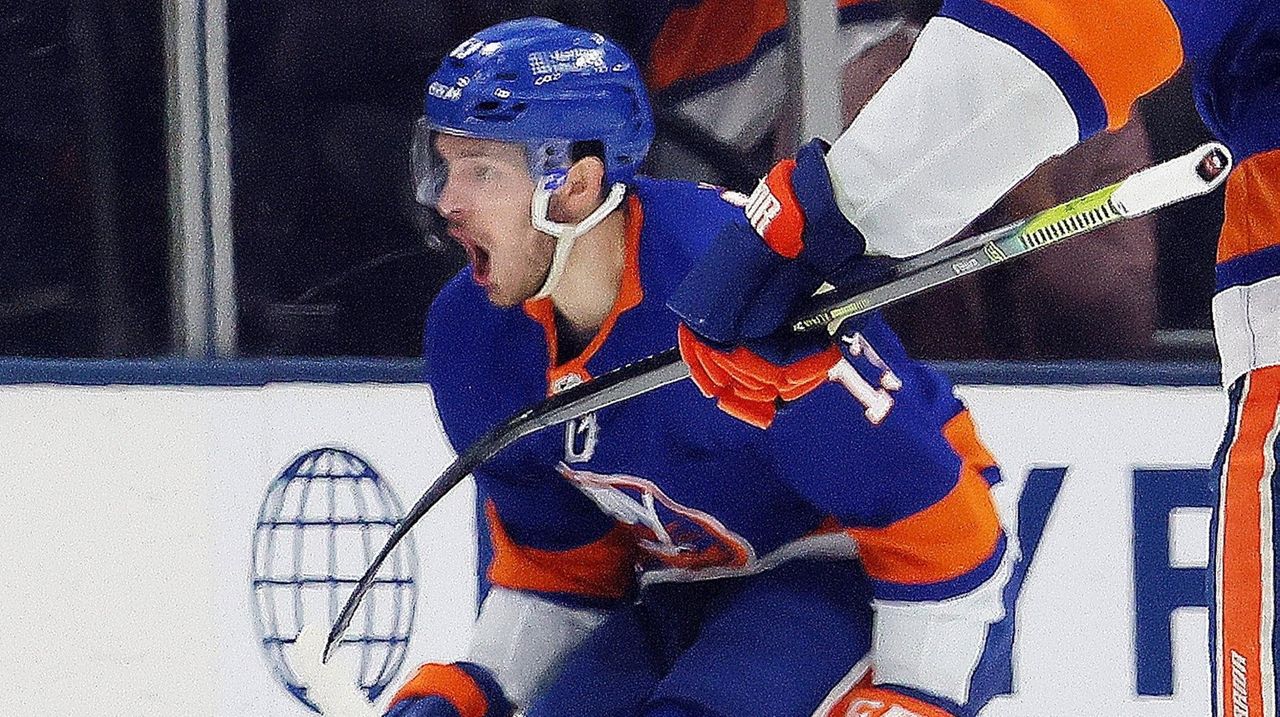 The Islanders would have been happy to have anyone score the winning goal.

Uncle Leo. Sparky the mascot. The Zamboni driver. Maybe Clark Gillies, after he was through chugging his adult beverage and smashing the can against his noggin.

But if the Islanders could choose who did the honors in Game 4 against the Bruins on Saturday night, there was no better option than Mathew Barzal, whose contribution chart now is pointed up, as it must be.

With a roster full of scrappy role-fillers, he is the team’s star, with a game that can be spectacular, self-destructive and everywhere in between.

In between is where he found himself seven games into the playoffs, at which point after a Game 1 loss to the Bruins in the teams’ second-round series he had no goals, three assists and many doubters.

It was said and written – including here – that Brock Nelson’s line had surpassed Barzal’s as the team’s true top trio, and that coach Barry Trotz should replace “Uncle Leo” Komarov on Barzal’s left wing to give him more help.

Trotz stuck by his guy, insisting Barzal was playing well, and that at 24 he had matured to the point that a scoring slump would not derail him.

“Would I like him to produce a little bit more? Absolutely,’’ Trotz said after Game 2, in which Barzal assisted on a goal but missed a breakaway chance.

“But he will. He will, and he’s a proud player, he’s a good player, and I have a lot of trust in him that he’s going to be able to do that.”

The guys discuss Game 4 of the Isles-Bruins playoff series where Mathew Barzal assisted on the tying goal and scored the winning goal.

On cue, Barzal scored the Islanders’ only goal in a 2-1 loss in Game 3. Then came Saturday, when the fourth-year center was the center of attention all night.

He twice was in the middle of scraps, first when he got his stick up on Curtis Lazar, prompting a scrum that ended with Matt Martin fighting Jarred Tinordi.

Later, Barzal’s cross-checking duel with David Krejci prompted Krejci to slash him in the groin. (Krejci was fined $5,000 by the league on Sunday.)

Barzal assisted on the first Islanders goal, when he maintained possession behind the net as Lazar harassed him and found Kyle Palmieri in front.

Then, with 6:57 left in the third period and the score tied at 1, he batted a loose puck past Rask for the winner.

Barzal later addressed several questions about his mindset during his playoff struggles, but he said he puts regular-season slumps and playoff slumps in different categories.

“I think you (reporters) at times want to make it out to be like the player’s feeling it if they’re not scoring,” he said, “but during the whole playoffs I’ve been pretty happy with my compete level. So if the points aren’t there and we’re winning games, I’m OK with that. It’s the playoffs.”

He said when it is “not coming offensively” he focuses on making himself useful in other ways. “That’s what it comes down to – just battling for the boys,” he said.

Still, Barzal realized he had to “step up” as the long, hard Bruins series wore on, so he turned up his intensity a notch. It lasted until he was named the game’s first star and yelled at the home crowd in celebration.

Is he hard on himself when he is not producing? “Absolutely,” he said, “but I feel like that’s more of a regular-season thing.”

So what if he did not score in the first round? The only score that mattered was Islanders over Pittsburgh in six. Now it’s 2-2 against the Bruins.

“I’m obviously hard on myself,” Barzal said, “but this time of year it’s just about getting wins, whether you’re scoring or not.”

For the Islanders, a scoring Barzal is much better than not.

Neil Best first worked at Newsday in 1982, returned in 1985 after a detour to Alaska and has been here since, specializing in high schools, college basketball, the NFL and most recently sports media and business.