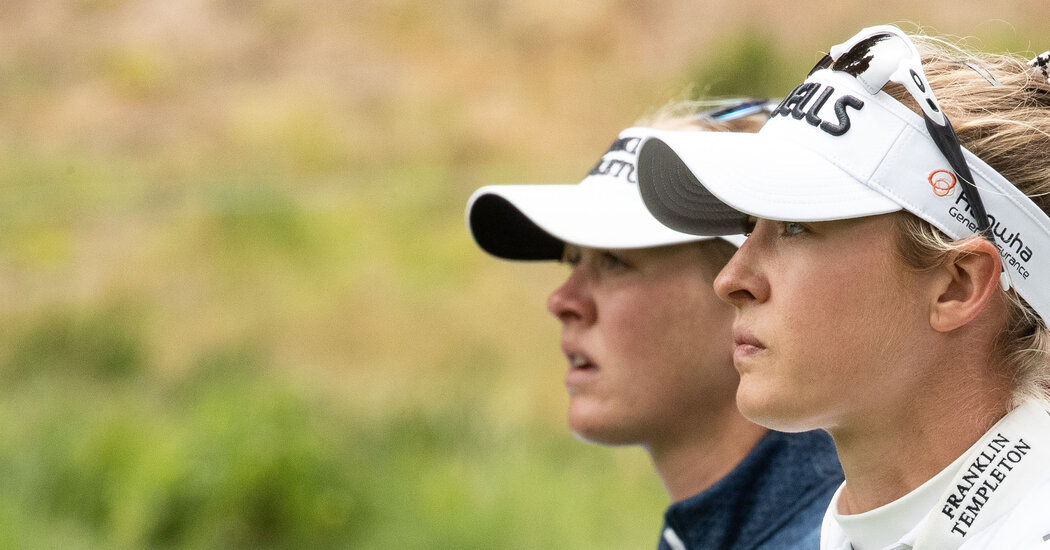 SAN FRANCISCO — Jessica and Nelly Korda often play practice rounds together but Thursday at the United States Women’s Open was the first time they had been in the same grouping for the first two rounds of a major tournament. The sisters and their parents were thrilled at the prospect of spending five-and-a-half hours together hiking the sloping labyrinth of a course that is the Olympic Club, the site of five U.S. men’s Opens, in the cool morning murk.

It was one of those family gatherings that was a much better idea in theory than in practice.

Starting on the ninth hole, Jessica, 28, birdied three of her first seven holes to share the early lead with Britain’s Mel Reid before the San Francisco Bay’s bedeviling winds upended her round.

She carded a one-over-par 72, five strokes behind the pace-setting scores of Reid and Megha Ganne, a 17-year-old amateur from New Jersey, who were tied atop the field after the first round. Korda spoke afterward as if she had survived a ride on a bucking bronco.

Nelly, 22, the higher-ranked Korda and the top-ranked American at No. 4, seven spots better than her sister, opened with four pars. But three consecutive bogeys, starting at No. 13, were the start of her unraveling. She carded a seven-over-par 78 that was encapsulated by her troubles on her penultimate hole, the seventh.

She had to hit her approach shot out of rough thicker than a camel’s eyelash while branches from a sapling fir tickled her face and neck. Her caddie, Jason McDede, asked the onlookers lining the right side of the hole several yards ahead of her to move back because, as he said, “We’re not sure where this is going.”

With a compromised swing, Nelly was only able to advance the ball a few yards. Her next shot found a greenside bunker and she walked off the hole with her head down after a seven-shot triple bogey.

After making a long putt to save par on her last hole, Nelly signed her scorecard and then left in a rush, stopping only to take selfies with a couple youngsters.

“She’ll be fine,” said Jessica, whose heart ached as she watched her sister struggle. She did what she could to help. On the 12th and 14th holes, Jessica held up a hand to stop a man holding a fuzzy microphone who was walking into Nelly’s line of sight while she was standing over par putts.

Jessica said: “Obviously I pay attention. It doesn’t matter who I play with, I don’t want anyone to play poorly. It’s tough to watch. You just know how it is. You’ve been in that position yourself. You don’t want anyone struggling with you or around you. So it’s never easy. At the same time, I have to play golf. You have to learn how to be slightly selfish.”

The sisters’ parents, Petr and Regina, carved out separate vantage points in the gallery, converging every so often to compare mental notes and commiserate. Pandemic-related restrictions limited the number of fans allowed on the course to less than 5,000. A few hundred of those followed the Kordas and the third player in their group, South Korea’s So Yeon Ryu, the 2011 champion, who posted a 74.

Petr yelled encouragement, but as the round continued, his voice became harder to hear over the wind.

“I think it’s kind of funny because I heard my dad, you can always hear my dad,” Jessica said. “He was telling Nelly, ‘Come on,’ and then like ‘Good birdie’ to me.”

She added, “I think they’re just enjoying watching us out here and trying to strike the balance of being supportive and also uplifting.”

The sisters’ parents made a beeline for the clubhouse as soon as the round was finished. Jessica and Nelly both have L.P.G.A. victories this year and they came into the week expecting to contend.

“You try not to play yourself out of it,” Jessica said. “Obviously it was so frustrating, making some silly mistakes and then the wind switched and it got warmer so we were trying to figure out how everything was going.”

She added: “I was throwing up grass and it was going one way and then another way so it was a little annoying. But you expect all of this at a U.S. Open.”