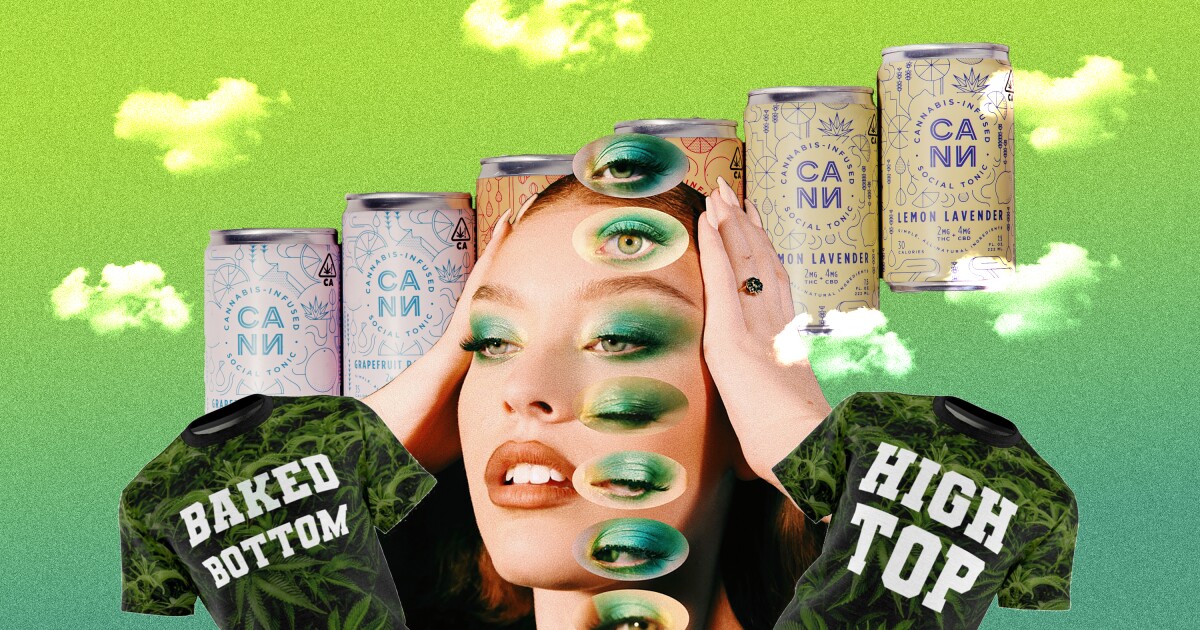 As Pride Month rolls along, it’s worth noting that legal weed — not just in California but across the country — owes a huge debt of gratitude to the LGBTQ community.

That’s because activists fighting for access to medical marijuana for terminally ill patients during the HIV/AIDS epidemic of the 1980s and ’90s (most notably Dennis Peron) helped get California’s first-in-the-nation medical marijuana law on the books in 1996. Other states followed suit, setting the stage for legal, nonmedical cannabis use in 16 U.S. states and the District of Columbia (though it remains illegal under federal law).

“You can draw a direct line from this particular period in time and the work of these queer activists and the legalization that created the modern cannabis industry in California,” said Andrew Freeman, co-founder of the L.A.-based Drew Martin cannabis brand with his partner, (in and out of business) Drew Martin Gosselin, and another business partner.

“However, it sometimes feels like that history has been a bit forgotten — especially when you look at queer representation in today’s cannabis space, which tends to be straight, white and male. That’s not reflective of the demographics of those that consume products, and that’s not reflective of those who fought for the decriminalization and legalization of the plant.”

Given the legal cannabis movement’s deep roots in the gay activist community, Freeman thinks there’s a larger role LGBTQ-founded brands should play moving forward. “I think as queer-owned companies today, we have a unique opportunity — and a responsibility — to continue the work that was started generations ago,” he said. “The struggle for decriminalization and legalization that was led by these activists is inextricably linked to today’s struggle to repair the damage the war on drugs has caused the Black and brown communities.”

In acknowledgment of the LGBTQ community’s contributions to cannabis commerce and culture, here’s a look at some of the Golden State’s queer-founded, -owned or -helmed cannabis brands with a few other marijuana movers and shakers — activists, educators and artists — thrown in.

Besito
Maggie Connors launched the female-founded, queer-led Besito (Spanish for “little kiss”) brand in 2019 with sleek, brushed-metal single-use 2:1 THC:CBD ratio vape pens with a hexagonal shape that makes them stand out and stay put (as opposed to round, pen-like vapes that tend to roll across the coffee table). The L.A.-based brand has since expanded into 1 gram prerolls and 10-packs of mini prerolls that clock in at 0.35 mg each. besito.la

Calexo
Oakland- and L.A.-based Calexo, co-founded by Brandon Andrew, Ken Pelletier, Ian Colon and Aiko Oshima and launched last year, is a relative newcomer to the cannabis-infused drink business but is already a standout thanks to the boldly patterned artwork on its bottles and the bubbly beverages inside them. Each 22-ounce, fruit juice-based, single-serving, 80-calorie bottle (offered in two flavors, citrus rose and cucumber citron) contains 10 milligrams of nano-emulsified THC. The smaller particles mean there’s less lag time between consumption and onset — about 15 minutes for most people. calexo.co

A joint effort among Freeman, Gosselin and business partner Nicholas Pritzker, this year-old brand offers low-dose, prerolled joints that combine sun-grown cannabis with one of four botanical blends: rose petals and peppermint; ginger root, lemon balm and damiana; lavender and passionflower; and chamomile, yerba santa and calendula. (On top of that, they source their flower from queer-farmer-owned Spirit Chicken Farm in Mendocino County.)

For the month of June, the company has partnered with two other LGBTQ-owned brands on this list (Cann and Sonder) to create a Pride bundle (including a sweatshirt while supplies last) that will benefit queer BIPOC organizations working in the cannabis space, including Copper House, Supernova Women and the scholarship program at pottery studio Pot LA. The Pride package of goodies will be available exclusively at Sweet Flower and MedMen in the L.A. area, Sava and Airfield Supply Co. in the Bay Area and Lighthouse in Palm Springs. drewmartin.co

In addition to creating psychedelic, color-saturated photo-based images for cannabis clients (including Flower by Edie Parker, Besito and the Sweet Flower dispensary chain) that manage to perfectly capture the vibe of getting high, L.A.-based queer multimedia artist Emily Eizen turns out trippy takes on furniture, home decor and limited-edition 16-by-20-inch poster prints, the last of which can be ordered via her website ($25). emilyeizen.com

Laganja Estranja
The nom du drag of L.A.-based choreographer and musical artist Jay Jackson, Laganja Estranja has appeared on “RuPaul’s Drag Race” (2014) and “So You Think You Can Dance” (2018 and 2019) and parlayed her role as an LGBTQ+ icon and cannabis advocate into a series of partnerships within the traditionally bro-centric weed business, including a 2016 preroll collaboration with the Hepburns and a 2019 edibles collaboration with Fruit Slabs.

She’s also created an assortment of merchandise that hits the fashion-meets-flower sweet spot, including T-shirts and totes bearing pot-leaf designs that call to mind the Louis Vuitton and Versace logos as well as two of the funniest stoner tees out there: One proudly proclaims “High Top” and the other “Baked Bottom” ($40 each).

“The Baked Bottom and High Top shirts were actually an idea from one of my #BUDS on Instagram for 4/20,” Estranja said, “but the punchy graphics and athletic font make them great for Pride too.” laganjaestranja.com

Sonder
Faun Chapin and M. Paradise launched Sonder in the Bay Area in 2018, and the brand quickly made a name for itself with stylish, eye-catching vape pens. Its newest product, a sublingual called Space Crystals, is sort of a grown-up, THC-infused version of Pop Rocks that snaps and crackles under the tongue. It’s available in three flavors, including a perfect-for-Pride-Month strawberry Champagne flavor called Cheers Queers. sondertime.com

A Venice-based brand that sources its cannabis from Northern California family farms (including its own 57-acre, off-the-grid farm in Nevada City), Stone Road was launched by Chief Executive Lex Corwin in 2016 and offers jars of flower, hash-infused joints (rolled by hand using French paper), concentrates and its newest product, roll-your-own pouches of preground flower about the size of an envelope clutch purse.

In a nod to Pride Month, the brand is donating 10% of its June profits to the LGBTQ Freedom Fund, a group that pays bail for members of the LGBTQ community in U.S. jails and immigration facilities. stoneroad.org

Sundae School
Dae Lim and Mia Park started their 4-year-old brand in New York City as a Korean-inspired unisex smokewear label (we first met them at New York Fashion Week Men’s in 2018) but relocated to L.A. — and expanded into cannabis — in 2019. The star of their THC-based offerings (which include joints and edibles) is the 0.3-gram tiny but mighty mini preroll (eight to a pack). sundae.school (wearables) and sundae.flowers (combustibles and edibles)